By Nelson Cary and Brad Gibson

The UFCW union has tilted at the Wal-Mart windmill for many years now, employing various tactics to get Wal-Mart employees interested in unions and union activity. One tactic that has been used is mass demonstrations, including picketing. It was the use of a demonstration against Wal-Mart that recently led the NLRB’s General Counsel, the “prosecutor” of allegations that an employer has violated the NLRA, to examine whether Wal-Mart acted lawfully when it asked a group of demonstrators, which included Wal-Mart employees, to leave the premises of two Wal-Mart stores. 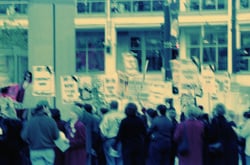 An organization calling itself OUR Walmart descended on two Wal-Mart stores in Texas one fall evening. The demonstrators at both stores arrived on large coach buses and tried to form picket lines directly in front of the stores’ entrances. At the first store, managers informed the group that they were not allowed on Wal-Mart’s property and advised the group to move their demonstrations to a nearby public sidewalk. At the time of this request, the managers did not know that there were any Wal-Mart employees among the 50 or so demonstrators.

At the second store, managers likewise informed the group that they were not allowed on Wal-Mart’s property and must conduct their demonstrations on public property. During that encounter, the managers recognized that two of the group members were Wal-Mart employees. None of the Wal-Mart employees in either group, however, asked if they could stay on the store’s premises to picket.

Wal-Mart has a Solicitation and Distribution of Literature Policy that instructs people on the manner in which they can solicit and/or distribute literature on Wal-Mart property. For employees, the Policy allows employees to engage in those activities outside Wal-Mart’s “facilities during non-working time.” For non-employees, the Policy requires that people request approval in writing three days prior to the time they desire to solicit or distribute literature.

In an advice memorandum recently released, the General Counsel determined that he would not pursue an unfair labor practice complaint against Wal-Mart. The General Counsel determined that Wal-Mart acted lawfully in applying its policy’s non-employee provision to the groups of OUR Walmart demonstrators, as no Wal-Mart employees within the group identified themselves as employees, and none asked or attempted to remain on Wal-Mart’s property to engage in protected activities. Thus, the employees had to affirmatively assert their right, under the NLRB’s existing precedent, to access their employer’s parking lots and other non-working areas for the purpose of soliciting or distributing literature. The General Counsel emphasized that Wal-Mart’s policy informed its employees of that right.

The advice memorandum is significant for labor professionals for at least three reasons: