Surely a Tugboat Captain is a Supervisor Under the NLRA, Right? Not Necessarily!

A tugboat captain is responsible for the safe operation of the vessel, its crew, and its cargo.  The captain has deckhands available to help with that operation, and can tell those 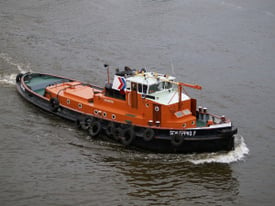 employees what to do and when to do it.  Surely, therefore, it would seem that a captain should stand a pretty good chance of qualifying as a “supervisor” under the NLRA.

A recent NLRB decision, however, is a reminder that supervisory status can’t simply be assumed.  It must be proven.  And that can be difficult.

In the context of a union election petition, the NLRB needed to decide whether tugboat captains were “supervisors” under the NLRA.  If so, then the captains could be excluded from the bargaining unit.  To be a supervisor, however, the employee must exercise, or effectively recommend the exercise of, at least one of 12 different powers, and do so using “independent judgment” in the “interest of the employer.”

The recent case involved the authority to “assign” work and “responsibly to direct” other employees in the performance of work.  The NLRB majority held that the employer failed to prove that their tugboat captains had these powers.  As in all cases involving supervisory status, there is a substantial amount of detail.  Those interested in the detail can read the full decision (pdf).

In summary, however, the NLRB found that the captains only provided “ad hoc instruction on discrete tasks” and didn’t “assign” work in the sense the NLRA requires.  Significantly, the majority noted that most of the time tugboats had only one deckhand, and thus the assignment of work by the captain was an “obvious and self-evident choice,” not one that required independent judgment.

With respect to the direction of work, the NLRB found that the captains were not “accountable.”  Thus, there was insufficient evidence that the captains faced the prospect of adverse consequences from the employer if their deckhand(s) failed to perform the tasks the captains directed them to perform.  The employer pointed to Coast Guard regulations that make the captain of a tugboat responsible for certain aspects of its operation.  The majority rejected this argument, however, rejecting the notion that supervisor status is governed by the “mere assertion” of maritime law.

Throughout the opinion, the NLRB repeatedly faults the employer for not providing sufficient examples of the exercise of the captain’s authority.  Since the burden of proof in a case involving supervisory status is on the party asserting that the employee is a supervisor, this failure of proof was fatal to the employer’s case.

Member Miscimarra (R) dissented.  While conceding that the NLRB has “encountered stronger evidence” regarding some aspects of supervisory status, he took the majority to task for discounting or disregarding evidence supporting supervisory status because it “could have been stronger.”  Indeed, he noted that the only evidence in the record came from witnesses the employer offered.  He believed that the record supported a determination that the captains both assigned work and responsibly directed the work of other employees.  Finally, he described it as “implausible” that the employer would send a tugboat out for dangerous and environmentally sensitive work without anyone vested with supervisory authority on board.  This was the practical effect of the majority’s decision.

The case is a must read for any employer or labor professional facing an imminent hearing involving supervisory status questions.  But even for those who are merely preparing for the possibility of such a hearing someday, the decision is still significant.  It underscores the critical importance of thinking through how supervisory status will be proven.  Job descriptions are obviously a start, but the majority’s recurring emphasis on “examples” shows that employers are well-advised if they can capture actual instances of the supervisory power being exercised.  With the NLRB’s “quickie” or “ambush” election rules fully in effect, employers should consider these issues far in advance of any union organizing activity.

IAM Losses First Round of Micro-Unit Fight with Nissan